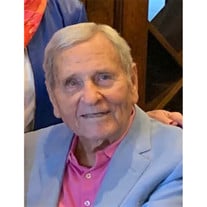 Willard Elward Lasseter, 90, of Enigma, Georgia, formerly of Moultrie, died Friday, August 7, 2020, at his residence. He was born April 8, 1930, the son of Earlie Elward Lasseter and Irene Lewis Lasseter Massey, both deceased. Willard was the founder and former owner of Lasseter Tractor Company and was a member of the First Presbyterian Church of Moultrie. He was well-known throughout the State of Georgia and especially in his home community for his love and dedication to agriculture and for his generosity in meeting local needs. Willard was also a fan of Bluegrass music and he enjoyed attending festivals around the southeast, and he never saw a Western movie he didn't like. He is survived by his wife Teresa Coarsey Lasseter; children Sonia Wilcox of Atlanta, Lynn Lasseter and wife Kathy of Moultrie, Tony Lasseter and wife Cindy of Moultrie, Autumn Veazey Price and husband Kevin of McLean, Virginia, and Zach Veazey and wife Anne of Tifton; sister Bobbie Jean Goza of Atlanta; eight grandchildren; and seven great grandchildren. In 1945 Willard began working part time for Moultrie's local John Deere Dealership leading to his and his father's purchase of the dealership which was completed in 1959. By 1960 his dealership was number one in sales volume for the Atlanta branch of John Deere dealerships, making it a model dealership for Deere and Company. The dealerships many accomplishments under his leadership include being named to the John Deere's Manager Club for 21 consecutive years, being a John Deere Signature Dealer for top performance in the market place for many years, and being a Gold Star dealer for top performance in commercial products in 2005, 2006, and 2007. The company also garnered the top market share in the Atlanta branch of dealerships for 3 consecutive years. In recognizing Willard in a statement before the United States Senate in 2007, the Honorable Saxby Chambliss (then Senator) stated, "It is hard to imagine what the state of agriculture might be in southwest Georgia if that young high school student, Willard Lasseter, did not step into the John Deere dealership in Moultrie, GA, in 1945 to begin working part time. I am extremely proud of the milestone (for 50 years of being a John Deere Dealer), that Willard has just met and it is my sincere hope that he continues his in the agribusiness community for many years to come." Willard continued serving in that leadership role until his retirement from the tractor company in 2016. In addition to his commitment to his business, Willard had a lifelong and deep interest in politics, and he was very active in identifying and supporting candidates for local, state and federal office who shared his values and who supported strong agricultural policies. Willard served as chairman of the Georgia State Farm Service Agency Committee for former Presidents George H. W. Bush and Ronald Reagan; on the Georgia Departm of Natural Resources under former Georgia Governor Sonny Perdue; was named Agribusiness Man of Year by Colquitt County Chamber in 1996; was one of the organizers of American Banking Company, now Ameris Bank, where he served on the Board approximately 25 years and chaired the Board the last several years before he retired; was a founder of the Colquitt Regional Hospital Foundation and a member of the Abraham Baldwin College President's Club. Graveside service were held Monday, August 10, at Lawrence Cemetery in Tift County, Georgia. Rev. Hugh Ward and the Honorable Saxby Chambliss officiated. Memorials may be made to Colquitt Regional Hospice, 516 5th Ave SE, Moultrie, GA 31776. Baker Funeral Home handled arrangements.

Willard Elward Lasseter, 90, of Enigma, Georgia, formerly of Moultrie, died Friday, August 7, 2020, at his residence. He was born April 8, 1930, the son of Earlie Elward Lasseter and Irene Lewis Lasseter Massey, both deceased. Willard was the... View Obituary & Service Information

The family of Willard Elward Lasseter created this Life Tributes page to make it easy to share your memories.

Send flowers to the Lasseter family.