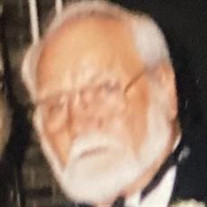 Talbert “Wandell” Holden,85, of Moultrie, died Thursday, March 11, 2021 at Colquitt Regional Medical Center. Born on June 22, 1935 to Noble and Maggie Hayes Holden. He was a retired Navy Vet of 20 years enlisted during Peacetime and Vietnam Era. He last served on U.S.S. Strong. He also served 10 years in the Fleet Reserve. In the Navy he was a ordnance mechanic, a firearm mechanist, and a member of rapid fire team. His rank was a GMG1 He is survived by his wife of many years, Ann Tillman Holden and their children: Rhonda and Michael Terrell, Chuck Brooks and Joan, and Phillip Brooks and Mandy. His grandchildren are: Josh and Robin Harrell, Jessica and Jon Boykins, Devon Brooks and Ashley, Kendall Brooks, PJ and Alyssa Brooks, Katie Brooks, Baron, and Katelyn Terrell. And his 8 great grandchildren: Taylor, Michael, TJ, Aniyah, Camdyn, Luna, Coral, and Pason. He is also survived by his dear friends, Vasser and Flonny Lawson. He is proceeded in death by his parents, Noble and Maggie Hayes Holden. His siblings: Ida, Charles, Dallas, Thomas, and Junior and Mildred Holden. Arrangements have been entrusted to Baker Funeral Home.

The family of Talbert Wandell Holden created this Life Tributes page to make it easy to share your memories.

Send flowers to the Holden family.