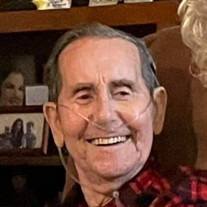 Leroy "Buddy" Yeomans, 81, of Norman Park, passed away on January 5, 2022, after a lengthy illness, not Covid, at his home surrounded by family. Funeral services will be held at 2:00 PM on Saturday, January 8, 2022, at Ellenton Baptist Church with Rev. Wayne Smith officiating. Interment will follow at Leila Cemetery in the family plot. Bee Lowery, James Sutton, Pat Cochran, Bo Greene, Dorsey Wiard, and Jody Brown will serve as pallbearers. The grandchildren will serve as honorary pallbearers. Born on May 9, 1940, in Ellenton, Georgia, he was the son of the late Ernest Yeomans and Clyde Chaney Yeomans. He retired from Destiny Mobile Homes and attended Ellenton Baptist Church where he was fondly known by the kids as “The Candy Man”. He loved bringing the kids candy, baking and sharing those treats with friends and family. He loved his daughters, grandchildren, and the rest of his family with all of his heart. He was a very hard worker and instilled in the family to always do your best and be on time. In addition to his parents, he was preceded in death by a brother - Joe B. Wright; son in law, Jesus Leon; and a great-granddaughter, Anola Lewis. He is survived by his daughters, Amanda and Jody Brown, Alice Dawkins, and Andrea Baker; grandchildren, Wesley and Katylnn Pope, Talena and Michael Jackson, Zack Baker, Molly Baker, Walt (Meredith) Brown, Cody Brown, Justin Lewis, Shanay (Nathan) Stone, and Chaney Brooks; sister, Louise Wingate; 9 great-grandchildren; and his beloved pets, Baby, Gunner Leroy, and Gurlfriend . The family will receive friends 1 hour prior to the service at the church. Arrangements have been entrusted to Baker Funeral Home.

Leroy "Buddy" Yeomans, 81, of Norman Park, passed away on January 5, 2022, after a lengthy illness, not Covid, at his home surrounded by family. Funeral services will be held at 2:00 PM on Saturday, January 8, 2022, at Ellenton Baptist Church... View Obituary & Service Information

The family of Leroy "Buddy" Yeomans created this Life Tributes page to make it easy to share your memories.

Leroy &quot;Buddy&quot; Yeomans, 81, of Norman Park, passed away on January...

Send flowers to the Yeomans family.