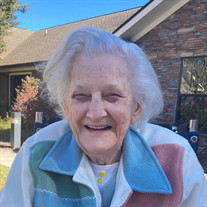 Lena Brooks Sandefur, 92, of Moultrie and formerly of Tallahassee and Tazewell, Tennessee, died December 9, 2021, at Magnolia Manor. Lena was born June 22, 1929, in Claiborne County, Tennessee, to the late Reverend Harley Brooks, Sr., and Nelia Brooks. She was married to the late Earl Sandefur. In addition to her husband and parents she was preceded in death by her daughter, Elizabeth Gilliand, two brothers, Walter Brooks and the Reverend Michael Brooks, three sisters, Betty Jean Brooks, Mary Garland, and Vena Large. She is survived by her daughter, Diane Sandefur Stines, and husband Charles, by her grandsons John Gilliland and Andrew Gilliand, her granddaughter Ellen Ragheb and husband Ben, and two great-grandchildren, Jamison Gilliland and Sam Ragheb, one brother, Harley Brooks, Jr., and several nieces and nephews. Lena was a Christian and was a Baptist. She lived in Tazewell, Tennessee, before moving to Tallahassee in 1971. She lived in Moultrie for several years with her daughter, Diane, and at Legacy Village and Magnolia Manor. Lena was an intelligent lady who enjoyed reading and was especially fond of crossword puzzles. She loved her family. She maintained a close relationship with her family. Lena always had a smile and was loved by all who knew her. No formal services will be held but a celebration of life will be held in Tennessee at a later date. Memorial contributions may be made to The Salvation Army—SE Department, P.O. Box 931298, Norcross, GA 30003-1298. Arrangements have been entrusted to Baker Funeral Home.

The family of Lena Sandefur created this Life Tributes page to make it easy to share your memories.

Lena Brooks Sandefur, 92, of Moultrie and formerly of Tallahassee...

Send flowers to the Sandefur family.