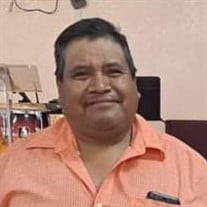 Juan Nopal Cecilio, 57, of Norman Park, passed away, Monday, August 16, 2021, at his home. Funeral Services will be held at 10:00 AM on Saturday, August 21, 2021 in the chapel of Baker Funeral Home with Pastor Rodrigo Cinto officiating. The... View Obituary & Service Information

The family of Juan Nopal created this Life Tributes page to make it easy to share your memories.

Send flowers to the Nopal family.