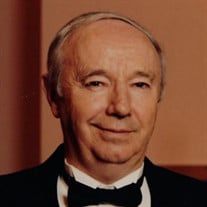 Hayne Lanier Henderson, 87, of Pavo, died on Saturday, March 6, 2021, at The Presbyterian Home of Quitman. Graveside services will be held at 3:00 o’clock pm on Tuesday, March 9, 2021, at Salem Baptist Church in Pavo, Georgia. The Rev. Tim Van Landingham will officiate. Born on May 23, 1933, in Hall County, Georgia, Mr. Henderson was the son of the late Harold Cobb Henderson and Lottie Belle West Henderson. He worked as both an auto mechanic and as a self-employed farmer. He was a long-time member of Pavo Baptist Church and was also a Veteran of the United States Army. Mr. Henderson is remembered by his family for his love of telling stories and for his talent for building or repairing just about anything. In addition to his parents, Mr. Henderson was preceded in death by his wife of 42 years, Myrtice Sloan Henderson; brothers, Heyward Henderson, Randall Henderson, and Donald Henderson; and sisters, Helen Henderson Forrester and Martha Henderson Nelson. Mr. Henderson is survived by his son, Harold Henderson of Pavo; daughter Holly Henderson, son-in-law Jeff Finger, grandson Sloan Finger, and granddaughter Thea Finger, all of Tallahassee, Florida; brothers, Ray Henderson and wife Janice of Gainesville, Georgia, Jim Henderson and wife Brenda of Ball Ground, Georgia, Phil Henderson and wife Deborah of Snellville, Georgia; sister, Joann Rogers and husband Monroe of Snellville, Georgia; and many extended family members. The family requests that, in lieu of flowers, donations be made in Mr. Henderson’s memory to Pavo Baptist Church, P.O. Box 187, Pavo, Georgia 31778 or to a charity of the donor’s choosing. Arrangements have been entrusted to Baker Funeral Home. Condolences may be expressed at www.bakerfhga.com

The family of Hayne Lanier Henderson created this Life Tributes page to make it easy to share your memories.

Send flowers to the Henderson family.