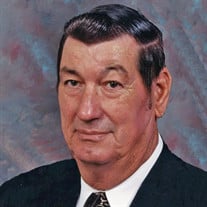 Gene Autrey Lamb,86, of Norman Park, passed away Monday, August 9, 2021, at Colquitt Regional Medical Center. A funeral service will be held at 11:00 AM on Friday, August 13, 2021, in the chapel of Baker Funeral Home with Rev. Corey Shiver officiating.... View Obituary & Service Information

The family of Gene Lamb created this Life Tributes page to make it easy to share your memories.

Send flowers to the Lamb family.