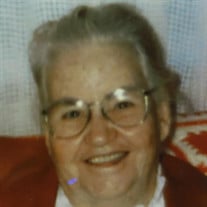 Ella Mae Morse,98, of Moultrie, died Tuesday, June 8, 2021 at Magnolia Manor. Funeral services will be held at 2:00 PM on Friday, June 11, 2021 in the chapel of Baker Funeral Home with Bro. Robert Tucker officiating. Interment will follow at Rocky Creek Cemetery. Guy Browning, Mike Morse, Frank Davis, Leon Morse, David Bratcher, and Auston Bratcher will serve as pallbearers. Ms. Morse was born on November 5, 1922, in Crosland, Georgia, she was the daughter of the late Jacob Evers Morse and Bertha Cribb Morse. She worked as a homecare provider and was a member of Rocky Creek Privative Baptist Church. In addition to her parents, she is preceded in death by her brothers, Allen Morse, Dan Morse, Richard Morse, William Morse, and James Thomas “J.T” Morse; sisters, Edna Davis and Emma Laseter; and sister-in-law, Rhoda Morse. Ms. Morse is survived by her brother, David Morse and wife Jean of Doerun; sister, Bessie Kersey of Ozark, AL; and sister-in-law, Judy Morse of Tennessee; numerous nieces and nephews and other family members. Visitation will be held one hour prior to the service from 1:00–2:00PM in the Chapel of Baker Funeral Home. Arrangements have been entrusted to Baker Funeral Home.

The family of Ella Mae Morse created this Life Tributes page to make it easy to share your memories.

Send flowers to the Morse family.