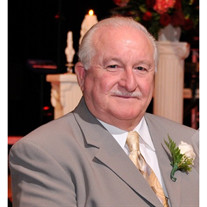 Edwin Morris Chitty, 80, passed away on Friday, November 29, 2019 with his family by his side.Funeral service will be held at 2:00 pm on Wednesday, December 4, 2019 in the chapel of Baker Funeral Home with Rev. Jimmy Voyles officiating. Interment with Military Honors will follow at Sardis Church Cemetery. Austin Hopper, Mackie Sheets, Tanner Lamb, Lee Anderson, Clyde Sheets, Jr. and Colby Henton will all serve as pallbearers.Morris was born on April 13, 1939, and raised in Moultrie, Ga., then fulfilled his dream by moving to the mountains in Reliance, Tn. He was the son of the late Paul Terry Raymond Chitty and Lilly "Nell" Miller Chitty Bonnell. He retired from the United States Navy with 20 years of service where he served during the Vietnam War. After retirement he pursued his love of fishing and shrimping in the Gulf before working and retiring from the Florida School Board. He also served on the Moultrie Police Department, was a member of the Nashville Songwriters Association and was known for his gift with words. He was of the Baptist Faith.In addition to his parents, he was preceded in death by his brother, Raymond B. Chitty.Mr. Chitty is survived by his daughters, Dawn C. Anderson and husband James Lee of Coral Springs, Fla., Beverly Sheets and husband Clyde, Jr. of Cohutta, Ga., and Hope C. Lamb of Norman Park; grandchildren, Amber Hopper of Margate, Fla., Austin Hopper and wife Kirbie of Jupiter, Fla., Mackie Sheets of Atlanta, Chelsea Sheets Henton and husband Colby of Dalton, and Tanner Lamb of Norman Park; great grandson, Gage Austin Hopper; sister, Diane Comer of Bradenton, Fla.; and many nieces and nephews. Visitation will be held on Tuesday, December 3, 2019 from 6:00 pm - 8:00 pm in the chapel of Baker Funeral Home.Arrangements have been entrusted to Baker Funeral Home.Condolences may be expressed at www.bakerfhga.com

Edwin Morris Chitty, 80, passed away on Friday, November 29, 2019 with his family by his side.Funeral service will be held at 2:00 pm on Wednesday, December 4, 2019 in the chapel of Baker Funeral Home with Rev. Jimmy Voyles officiating. Interment... View Obituary & Service Information

The family of Edwin Morris Chitty created this Life Tributes page to make it easy to share your memories.

Send flowers to the Chitty family.