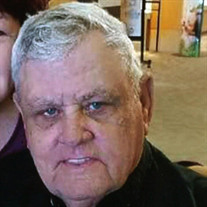 Retired, Vietnam Veteran, Master Sergeant Edmondson J. Irby Jr. passed away on November 23, 2021, at Colquitt Regional Medical center surrounded by family and friends. Funeral Service will be held at 11:00 AM on Friday, November 26, 2021, at Autryville Baptist Church with Rev. Robert McCoy officiating. Inurnment will be held at Georgia National Cemetery in Milledgeville, Georgia at a later date. The family will receive friends one hour prior to the service. He was born July 7, 1944, to Edmondson J. Irby Sr and Mary Pauline Brown Ward. He grew up in Dublin, Georgia, and attended East Laurens High School where he was very active in sports especially basketball. Soon after joining the Army, he was stationed in Korea and served a tour in Vietnam. Most of his 21-year military career he worked in the US Army Recruiting Command and continued serving military veterans through the Georgia Veterans Affairs Office for 18 years. After retiring from the state Ed continued his passion for helping veterans and their spouses throughout the state of Georgia, by assisting them in receiving their benefits. He was a member of the Masons and an active member of VFW Post 4830 where he served as its Commander, and also served as State Surgeon of the VFW of Georgia. Ed is survived in life by his wife, Penny Sloan Irby; his daughters, Lynn George and husband Rick, Cindy Rudolph and husband Tom, and Beth Hayden; son, Krist Overby and wife Tonya. He was a proud grandfather of 11 grandchildren, Jaysen McCook (Jennifer), Dustyn Rudolph (Cara), Darien Irby (Anthony), Sarah Rudolph, Casey Rudolph, Jenna Hayden (Carlos), Parker George (Chelsie), Sean Hayden, Ella, and Cecelia Overby. Also survived by siblings, Vanita Morris, Joan (Leroy) Herring, Pat Jones and husband Deacon, Ronnie Irby and wife Vera, and Sherrie Holly. In addition to his parents, Mr. Irby was proceeded in death by his grandson Jacob McCook and sister Betty Joe Evelsizer. Arrangements have been entrusted to Baker Funeral Home.

The family of Ed Irby created this Life Tributes page to make it easy to share your memories.

Send flowers to the Irby family.