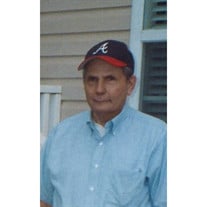 Charles Alvin Bell, 83, of Moultrie, peacefully left to see the lord Tuesday, May 26, 2020 at Golden Apple Assisted Living Center. A graveside service will be held at 12:00 PM Friday, May 29, 2020 at Sardis Church Cemetery with Rev. Ricky McLaughlin. Born on April 12, 1937, in Colquitt Co., Georgia, he was the son of the late Charlie Andrew Bell and Ethel Merle Croft Bell. Mr. Bell honorably served in the United States Air Force and was based in Guam and Idaho. After serving in the United States Air Force, he worked in an offset printer service for 30 plus years in Valdosta, Ga. Mr. Bell then owned his own business "Economy Printers" for 10 years. He was of the Pentecostal Faith. He was a kind, loving, and supporting son, brother, and uncle. He attended Berlin Elementary School, Moultrie High School, and was a graduate from the Machine Shop Program at Moultrie Technical College. In addition to his parents, he was preceded in death by, a brother, Raymond Bell; sisters, Thelma Williams, Virginia Tucker, and Shirley Snow. Mr. Bell is survived by his brothers, Dolan Bell of Monroe, Charles Bell of Moultrie, and Darrell Bell of Moultrie; sister, Lona Bell Dozier of Moultrie; and many nieces and nephews. Arrangements have been entrusted to Baker Funeral Home. Condolences may be expressed at www.bakerfhga.com

The family of Charles Bell created this Life Tributes page to make it easy to share your memories.

Charles Alvin Bell, 83, of Moultrie, peacefully left to see the...

Send flowers to the Bell family.