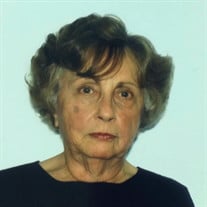 Barbara Ann Carter Bronson, 82, of Moultrie, Georgia went to be with our Lord on Friday, December 17, 2021. Her departure took place at the Cleveland Clinic Indian River Hospital in Vero Beach, Florida. Barbara Ann’s funeral service will be held on Saturday, January 1, 2021, at 11:00 a.m., in the Chapel at Baker Funeral Home in Moultrie, GA. To be officiated by Autreyville Baptist Church’s Rev. Robert McCoy and Rev. Danny Hortman. Interment will be at Pinecrest Memory Gardens with a reception immediately to follow at Autreyville Baptist Church. Born on January 12, 1939, in Moultrie, Georgia. She was the daughter of the late Voncile Hortman Carter and Orus Francis Carter. She married Air Force officer and pilot, Herbert E. Bronson of Sanford, Florida, at the young age of 17, spending her younger years loving, teaching, as well as protecting her 3 children while living abroad and traveling around the world fighting for freedom. In her 40s, she was determined to attend college to achieve a Degree in Bi-Lingual Education, graduating with Top Honors. She went on to instill wisdom in our young children in the states of Texas and Georgia. In addition to her parents, she was preceded in death by her husband, Herbert E. Bronson along with her brothers, Clinton, and Milton Carter. Mrs. Bronson is survived by her son, Christopher H. Bronson with his wife Nancy; daughters, Mitzi A. Berry with husband John; and Carmen Garcia Bronson. Sister, Bittena Beam and brother, Ronald Carter with wife Loyce. Grandchildren, Sharif Carter Bronson, Andrea Bronson with husband Hazem Zureiqat, Rachel Berry, Sean Bronson with wife Camila, Jocelyn Pleskach with husband Adam, Bianca Garcia, Jessica Bronson, Michael Bronson with wife Julia, Kimberly Bronson and Sonja Garcia. Great Grandchildren, Devon Garcia, Mikaela Torres, Thomas Bronson, Madelyn Bronson, Kaylee Bronson, Kira Bronson, and Carter Bronson. Philippians 1:23 “But I am hard-pressed from both directions, having the desire to depart and be with Christ, for that is very much better.” Arrangements have been entrusted to Baker Funeral Home.

The family of Barbara Bronson created this Life Tributes page to make it easy to share your memories.

Send flowers to the Bronson family.