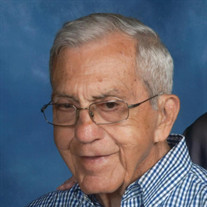 Bailey S. Lavender, 87, of Lenox, Georgia, passed away on Sunday, February 27, 2022, at his residence with his wife by his side. A graveside service will be held at 11:30 AM on Wednesday, March 2, 2022, at Leila United Methodist Church Cemetery. Matthew Lavender, Jordan Lavender, Joseph Lavender, Josiah Lavender, and Ken Jernigan will serve as Honorary Pallbearers. Born on November 19, 1934, to the late Richard Dewey Lavender and Lillie Gilreath Lavender Davis, Mr. Lavender worked as a sales associate for most of his life before becoming a security officer at Tift Regional Medical Center. He also served in the United States Marine Corps in the Korean War. Love for his family and Savior, a commitment to hard work and responsibility, and a willingness to help others marked Mr. Lavender’s life. Things didn’t matter much to him; people did. He was gracious, generous and quietly courageous, willing to tackle new areas that interested him (he took up competitive running in his 50s and at 70 became the oldest participant in a bicycle training class for security personnel, earning the nickname “Bottom Bracket Bailey”). Known to many coworkers as Mr. Bailey, he often worked two to three jobs at a time and particularly enjoyed law enforcement. Yet his experience varied widely, from selling fertilizer plants to building fiberglass boats and operating a DUI school. In all, family and faith remained central. He was devoted to his wife of 66 years, quick to tell his sons he loved them and beloved as Papa Bailey by his grandchildren. Mr. Lavender also loved Jesus Christ in a relationship and appreciation of God’s grace that grew through the years. In addition to his parents, he was preceded in death by his brother Richard Lavender and sister Jackie Rookes. Mr. Lavender is survived by his loving wife, Marguerite Tillman Lavender of Lenox; sons, Frank Lavender and wife Ann of Piney Flats, Tennessee, and Rick Lavender and wife Janice of Watkinsville, Georgia; grandchildren, Matthew Lavender, Jordan Lavender and wife Elizabeth, Anna Lavender, Joseph Lavender, Rebekah Lavender, and Josiah Lavender; sisters, Jewel Roberts of Atlanta, Joyce Hollis of Milledgeville, and June Fullington of Kathleen; sister-in-law, Maureen Cook of Lenox; and brother-in-law, Nolan Tillman and wife Barbara of Tampa, Florida. Arrangements have been entrusted to Baker Funeral Home.

Bailey S. Lavender, 87, of Lenox, Georgia, passed away on Sunday, February 27, 2022, at his residence with his wife by his side. A graveside service will be held at 11:30 AM on Wednesday, March 2, 2022, at Leila United Methodist Church Cemetery.... View Obituary & Service Information

The family of Bailey S. Lavender created this Life Tributes page to make it easy to share your memories.

Send flowers to the Lavender family.