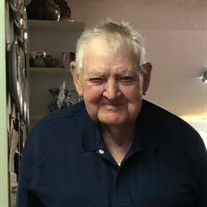 Abraham Lincoln Norman, 88, of Moultrie, passed away on Tuesday, January 18, 2022. Lincoln was born on April 2, 1933, in Colquitt County, Georgia to parents Joe Wheeler Norman, Sr., and Ola McMullen Norman. Lincoln lived in Colquitt County all his life on the family farm where he was born. To know Lincoln was to love him. He had a gentle spirit that touched all who met him. Lincoln lived on and loved working around the family farm. To call Lincoln a hard worker would be an understatement at best. He loved being a part of the work that was needed to run the farm and to tend to the crops. If there was work to be done, that is where you would find him. He would often say “Lets get it going” which meant it was time to get to work. Lincoln loved staying busy but his family was his true passion. He loved his family deeply. Lincoln would often be seen at family gatherings holding the babies and laughing as he watched the kids run around and play, and that love was equally returned. He was very attentive to each child’s whereabouts and guarded their safety with due diligence. He always enjoyed visiting and spending time with his brothers and sisters throughout the years. Lincoln was the eldest son and assisted in raising four generations of his near kin. Lincoln spent most of his later years fishing and spending time with his family, especially his younger brother Herman Norman who he was very close with, his nephew Larry Eldridge and wife Marsha, his brother-in-law Homer Eldridge, his niece Lynn Eldridge and his other nieces and nephews who he also enjoyed visiting with whether he was at home in Georgia or visiting the family in Florida. Lincoln was an active and faithfully attending member of Sardis Primitive Baptist Church since November 1955. He was almost always the first one ready for church on Sunday mornings and was eager to get there to greet and fellowship with his fellow brothers and sisters. Lincoln was preceded by his parents Joe Wheeler Norman, Sr.and Ola McMullen Norman; and his two sisters, Virginia Norman Eldridge and Hazel Norman. He is survived by his brothers, Joe Wheeler Norman Jr. (Laverne), Nick Norman and Herman Norman of Moultrie; his sister Edith Norman Smith of Valdosta; an brother-in-law, Homer J. Eldrige of Moultrie; He also has many nieces and nephews that loved and will deeply miss their “Uncle Linc”. Services will be held at 1:30pm on January 22, 2022 at Sardis Primitive Baptist Church with Elder Dwight Marshall, and Elder Jim Sandlin officiating. Interment will be in Sardis Cemetery in the Norman plot. Prior to Saturday's services, family and friends will gather for a church-provided meal at Sardis Primitive Church at 12:00 pm. The family will receive relatives and friends at Baker Funeral Home on Ga. Hwy. 37 Friday, January 21, 2022 from 6 to 8 PM. In addition to flowers or in lieu of flowers you may also donate to the Sardis Primitive Baptist Cemetery Fund at 2303 Sardis Church Rd, Moultrie, GA 31788. Arrangements have been entrusted to Baker Funeral Home.

The family of Abraham Lincoln Norman created this Life Tributes page to make it easy to share your memories.

Abraham Lincoln Norman, 88, of Moultrie, passed away on Tuesday,...

Send flowers to the Norman family.